I didn’t really know what to expect. I had ridden the Dewdney Trail fifteen years ago (almost). Since that time, my memory of it has become hazy. A blur, now more feelings and impressions than concrete detail. However, I do remember that, at the time, I really liked it. With the access road literally across the street from my motel, the eminently charming-in-it’s-own-way Rossland Motel, I set out to re-acquaint myself with a trail that I had ridden only once, many years ago. 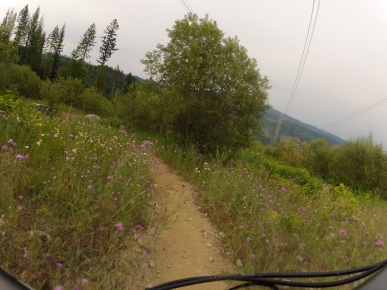 The things that I can actually recall about my time riding the Dewdney Trail are few. I remembered that there was a long, steep, gravel road that you had to ride in order to get to the trail head, which was a little hard to find. Back then, we had actually ridden past the trail head and had to double back once we realized our mistake. I also remember the Dewdney Trail being a long singletrack descent with a bunch of switchbacks that followed a power line or cut block down to the Highway 22 at the bottom of the valley. How many switchbacks, I couldn’t tell you. And that highway back to town was a horrendously steep climb. Of course, memory being what it is, I didn’t really know how much of what was in my mind was accurate.

I do remember this though. Vividly, in fact. It had rained earlier in the morning and the valley was thick with low hanging clouds. I was on the first true mountain bike that I ever owned. A red Haro Escape with a pair of Rock Shox Quad 10 suspension forks bolted to the front. I had bought it from a family friend. And I also remember this: I threw a tantrum in the middle of the very steep gravel road when my bike wouldn’t shift properly, which was, of course, the bike’s fault. And I mean a t-a-n-t-r-u-m, complete with histrionics and everything. With all this mind, I set out to revisit a memory and see how much has changed in fifteen years. Hopefully this time would be tantrum-less.

Right off the bat, the access road is not quite as I remember it. Years ago it felt relentless and big. Now it’s not actually that bad. Sure, it’s still a longish thirty minute spin. But years of grinding up the Smith-Dorrien road have prepared me for that.

As I spin up the access road, the trail head suddenly appears to the left. This too has changed. Well marked and signed, it would be hard to miss it now. Which is good.

And those switchbacks, they’re still there. The Dewdney Trail is as fast and flowly as anything out there. There is an amazing sensation, bombing down Dewdney, as you go from a dark copse of trees to an open field and back into darkness again. The transition between the two is both mesmerizing and grin-inducing. The trees are so dense that my sunglasses make it hard to see. The open areas are filled with purple and yellow and white flowers. This all mixes into a painterly blur. The chiaroscuro effect of dark to light to dark leaves a deep impression.

I’ve found myself making laser sounds as I’m charging through the technical sections. Every rock I negotiate gets a “pew.” This is fun. So much fun that I’m making noises to myself. It’s probably a good thing that I’m riding this alone.

Then, out of nowhere, the trail ends. The Highway 22 an unwelcome sign my ride is over. It’s not as steep as I remember, but it still steeper than I would like and it’s definitely as long. At this point, there’s nothing left to do but replay the fantastic ride on the way back to the motel. That was a lot of fun.