Like a visiting a museum to remind yourself how we are descended from an intrepid fish-creature that dragged itself onto the shore from a primeval sea, it can be similarly enlightening to revisit our cycling ancestors. In many ways, the bicycle design that we ride today is little changed from the first bicycle-ancestors to crawl out of the proverbial primordial sea. And, just like those early fish-creatures (tetrapods), the ancestors of the modern bicycle took on some surprising forms.

Known as velocipedes, which is derived from the Latin velox, swift, and pes, a foot, these strange new inventions first began to appear in the early 19th century. They generally consisted of a five foot long bar supporting a wheel on each end.  Riders would straddle the bar and propel themselves with their feet. As such, any bump would be directly transmitted to the groin. Needless to say, the first velocipedes had trouble attracting a dedicated fan base. They generally remained the province of foppish dandies, and gave us the term “hobby horse” or “dandy horse.” 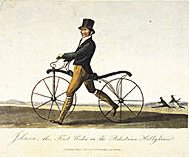 However, in the 1860’s a Frenchman named Pierre Lallement started to affix treadles to the front wheels of his velocipedes. Now riders could pedal instead of shuffling along and wearing out the soles of their boots. From that moment, velocipedes boomed in popularity and quickly turned into a craze. Just as Mother Nature experimented with strange new forms in those ancient seas, so to did the velocipede enthusiast. Unicycles, bicycles, dicycles, tricycles, quadracycles all quickly came into existence, jostling with each other to become the most popular design. 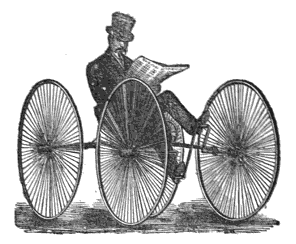 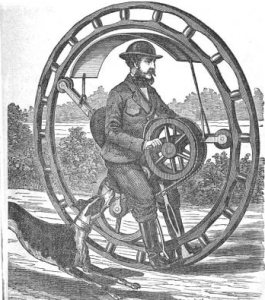 Another Unicycle.
Admit it, you want to know if this design actually worked.

Even steam power was considered.

This flowering of design soon narrowed on the most successful of the velocipedes, the bicycle. Easy to ride, the bicycle propelled the velocipede craze to new heights. Dedicated public rinks began to sprout up everywhere. Many were covered against the elements and illuminated at night, giving us the precursor to the modern velodrome. Velocipede rinks could be found everywhere. Even Halifax, despite being a small city at the time, could boast about having 5 different velocipede rinks. And with each velocipede rink came schools to teach the basics of riding to the increasingly enthusiastic crowds. As one observer described, “scores of riders rush madly after each other at break-neck speed, round and round.”

However, the incredible popularity of the velocipede rink created a problem. Because the pedals directly drove the wheels, the speed a velocipede could go was directly related to the size of its wheels. And people wanted to go faster! Much faster! Logically, the solution to this problem was….. 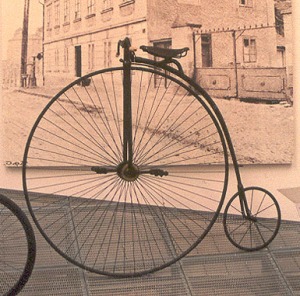 The extremely large wheel meant that the penny farthing could move much faster than the other velocipedes. Of course, it also meant that you had to precariously perch yourself a few feet in the air. Look back at the previous observation of velocipede rinks, and now imagine it with dozens of riders, all on top of penny farthings, whirling around “each other at break-neck speed, round and round.” The penny farthing quickly developed a reputation for being notoriously dangerous.

As a direct response to the risks of riding a penny farthing, companies began to produce the safety bicycle.  Driven by a chain and gears, the safety bicycle was as fast as a penny farthing but without being as crash-y. Its distinctive diamond-shaped frame made it sit low to the ground so it was easy to mount and dismount. And, unlike the penny farthing, when you crashed it wasn’t like climbing on top of a bar stool and then jumping off, head first, with your hands behind your back. With the advent of pneumatic tires, by the late 1880’s, the writing was on the wall and the safety bicycle began to supersede the velocipede as the dominant form of bicycle. The rest is history. 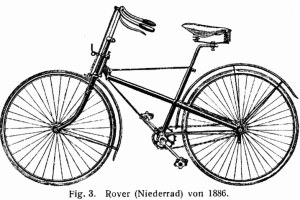 With the velocipede in decline, the safety bicycle set the template from which modern bicycles still largely draw from. It is the direct ancestor of the bikes we ride today. For those interested, the excellent and thoroughly charming book The Velocipede: Its History, Variations, and Practice can be found here.  If you’re anything like me, you’ll think about velociraptors every time you read the word velocipede.

One thought on “In Which We Consider The Velocipede”